Jones is an author, speaker and the first Muslim to serve on City Council. He has publicly stated that he intends to run for Cleveland Mayor in 2021. As with other candidates, his campaign activities require ongoing scrutiny. But that scrutiny has proven difficult to apply. On his 2020 report, filed in late January, virtually all of his contributions were listed without names attached.

The report reflects that Jones raised more than $80,000 from June 29 to Dec. 31. Among the Cleveland mayoral hopefuls, that’s more fundraising than all but Council President Kevin Kelley and young executive Justin Bibb. Only two of Jones’ nearly seventy individual contributions were identified by donor name: Kanubai Patel and Pratimaben Patel of Wickliffe gave $500 and $550 to Jones, respectively, in August.

The majority of the other contributions appear to have been made on Jones’ Act Blue site, but were tabulated in his report without identifying details. That’s against the law.

A Cuyahoga County Board of Elections’ spokeswoman confirmed to Scene that the BOE had been in contact with Jones’ treasurer, who pleaded ignorance and said she was working to update the report.

One of the line items, however, was a $12,086 contribution made on Nov. 4. Regardless of the contributor, that far exceeds the maximum allowable contribution for Cleveland mayoral candidates. The cap was set by city council in 2016 at $5,000 for an individual and $7,500 for a political action committee.

Jones’ expenditures raise eyebrows as well. He spent $44,000 in 2020 — a non-election year — and paid a number of individuals and entities for work presumably unrelated to his campaign. In many instances, the descriptions of these payments were either gently massaged or wholly mischaracterized to present them as legitimate election activities.

The largest contributions were to Jones’ friend Youssef Kromah, with whom he traveled to Egypt in December, (see screen grab of Instagram post above and below). Two expenditures totaling $6,500 to Kromah — erroneously spelled “Youssef Komah” in the report — were allegedly for Kromah’s work as a “campaign strategy and marketing consultant.”

Kromah is a self-described poet, author, public speaker, community activist and television host. His address listed on Jones’ report is Philadelphia, though Kromah’s website says that he is currently a student at the University of Cairo. His Facebook page also says that he currently lives in Cairo. Jones did not respond to multiple requests for comment submitted via phone and email about the 2020 report. Kromah, too, did not respond to an emailed series of questions. A voicemail was not returned.

As evidenced from their Instagram accounts, though, Kromah accompanied Jones for portions of his December trip. He noted in a December 7 post that he and Jones had “adopted” an orphanage in Aswan, Egypt and had donated 30,000 Egyptian pounds (the equivalent of about $2,000 USD) to cover the expenses of the orphans there. 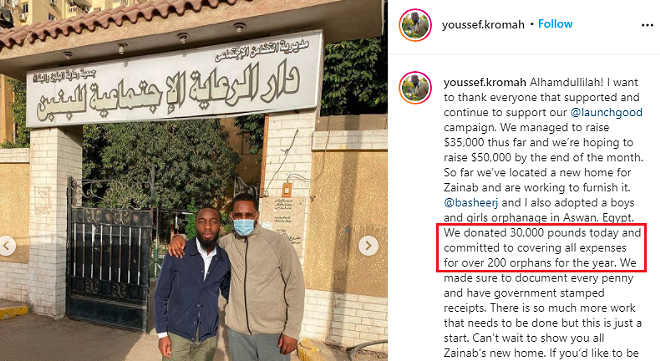 It’s unclear if a portion of Jones’ payments to Kromah went to the orphanage or for other purposes — the trip itself, for example — but the second payment to Kromah, for $4,000, occurred on Dec. 3, shortly before Jones departed.

Jones also listed an expenditure of $1,500 for a “Quaran School in Senegal” [sic] in January.

Charitable donations are a permissible use of campaign funds, provided the organization receiving the funds is a nonprofit, duly designated by the IRS, or otherwise approved by the Ohio Elections commission. Campaign funds are otherwise restricted to costs associated with an election. Advertising and promotions, staffing, events, etc.

Through 2020, Jones’ campaign made a number of payments to individuals and LLCs for services that they do not typically provide.

Jones paid $500 to a healthcare coordinator for “administrative services,” for example. He paid $1,000 to an Islamic studies teacher in Tampa, Fla., for “writing/content consulting.” He paid $3,200 in two payments to King Management Group, an LLC incorporated in 2017 “to provide comprehensive school management services” for “marketing/branding services.” Representatives from the King Management group did not respond to multiple phone calls from Scene.

One of the more suspect recipients was an organization called the WPM Group, whose services are described on LinkedIn as “landscaping, snow plowing, professional services, janitorial, property management, entertainment (promotions etc.), flagging co.” Jones gave $2,870 to WPM in three payments ($1,270, $1,100, and $500), ostensibly for “public relations.” These payments were all made in late October and November, shortly before Jones moved into a new house in Hough.

When Scene contacted Jones one final time via Instagram to give him an opportunity to clarify his payments or provide a statement, he directed us to Ebony Webster, whom he identified as his communications director.

Webster, when reached by phone again, identified herself as Jones’ Communications Director and said the payments to WPM Group were for her services in that role. How long had she been Jones’ communications director, Scene asked. Webster would only say that it was a recent development.

To a series of other questions related to the 2020 report, Webster provided a written statement Friday morning from Jones.

“We are aware there are some amendments that need to be made to the recently released financial report,” the statement read. “Our financial team is working to get that done. I am dedicated to my role and responsibilities as a City leader and councilman. Because of that, I have consultants assisting me and advising me in making the best decisions.”

***
Sign up for Scene’s weekly newsletters to get the latest on Cleveland news, things to do and places to eat delivered right to your inbox.

We use cookies on our website to give you the most relevant experience by remembering your preferences and repeat visits. By clicking “Accept”, you consent to the use of ALL the cookies.
Cookie settingsACCEPT
Manage consent