With DirecTV becoming a separate company again, the satellite-TV provider has a chance to make sweeping changes to its business — as well as possibly inch closer to a long-desired merger with Dish Network Corp.

But none of it will be easy. The company, which is starting a new life as a joint venture of Dallas-based AT&T Inc. and TPG, is expected to keep shedding customers for years. And though a tie-up with Dish could improve its prospects, antitrust hurdles still may be insurmountable.

The one thing that seems clear is that deep upheaval lies ahead, said Todd Lowenstein, chief equity strategist with the Private Bank at Union Bank. A private equity firm like TPG can take out-of-favor assets and whip them into better shape — without the scrutiny and pressure of public markets.

“PE firms can restructure, rehabilitate and invest in these assets,” Lowenstein said, “to enable them to fight and live for another day.”

AT&T, which acquired DirecTV six years ago for $67.1 billion, including debt, has been seeking ways to take the slumping business off its books. It announced its solution to that problem Thursday with the TPG deal, which will establish the joint venture and put $7.6 billion in cash into AT&T’s coffers.

The company has lost an average of 1.5 million TV customers a year since it absorbed DirecTV. The 2015 takeover was poorly timed — coming just before years of rampant cord-cutting — and that’s reflected in DirecTV’s current valuation. The TPG transaction, which involves the private equity firm acquiring a 30% stake in the business, values AT&T’s pay-TV operations at only about $16 billion.

“AT&T shoves DirecTV off its books and gets some additional cash in hand,” said Tammy Parker, an analyst at GlobalData. “This deal was obviously the best one AT&T could muster under the circumstances.”

The sale of the DirecTV stake is AT&T Chief Executive Officer John Stankey’s biggest strategic move since taking over in July. And it helps the company focus on its three priorities: 5G wireless service; fiber-optic broadband; and HBO Max, its $15-a-month streaming service.

For the new DirecTV, the big remaining question is whether a merger with Dish is more palatable now. A proposed combination of the two satellite services was shot down by the Federal Communications Commission and the U.S. Justice Department in 2002.

But that was before the cord-cutting era ravaged the satellite business. And with DirecTV less tethered to a massive telecom company like AT&T, perhaps regulators might look more kindly on a Dish deal.

Executives from both Dish and AT&T have acknowledged the logic of such a merger. A combined company could operate more efficiently, with lower costs and a larger customer base. Dish declined to comment.

He thinks regulators will be more friendly to a deal if DirecTV is under the joint venture rather than AT&T. 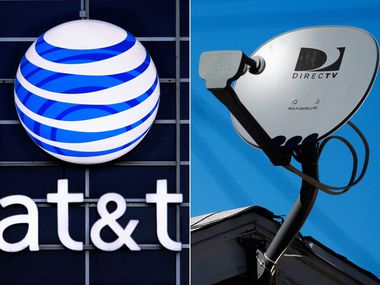 Casting off declining operations is a familiar strategy for phone companies, and the businesses they shed often continue to struggle.

In April, Frontier filed for bankruptcy after collapsing under a pile of debt and years of annual losses.

Even private equity investors fold when dealt a bad hand. Verizon sold its eroding phone-service business in Hawaii to Carlyle Group in 2005. The Hawaiian telecom company filed for bankruptcy in 2008.

TPG, formerly known as Texas Pacific Group, owns and holds stakes in dozens of companies, including Spotify Technology SA and Petco Health & Wellness Co. In November, TPG agreed to sell Astound, a cable and broadband provider, to another private equity company for $8.1 billion.

It’s notable that AT&T’s Bill Morrow — an executive known for his cost-cutting zeal — has been named CEO of the new DirecTV. Morrow previously led the Australian national broadband network, as well as Clearwire Corp. He was brought in to lower expenses at AT&T.

In the past year, the company eliminated 17,040 employees, or nearly 7% of the workforce.

“I don’t know if they called him the ‘cost czar,’” Hodulik said. But cutting costs has to be a key focus for DirecTV going forward, he said. “At the end of the day, this is a declining business.”

In a year largely defined by shutdowns, this Madison business grew… and continues to boom

7 hours ago
We use cookies on our website to give you the most relevant experience by remembering your preferences and repeat visits. By clicking “Accept”, you consent to the use of ALL the cookies.
Cookie settingsACCEPT
Manage consent